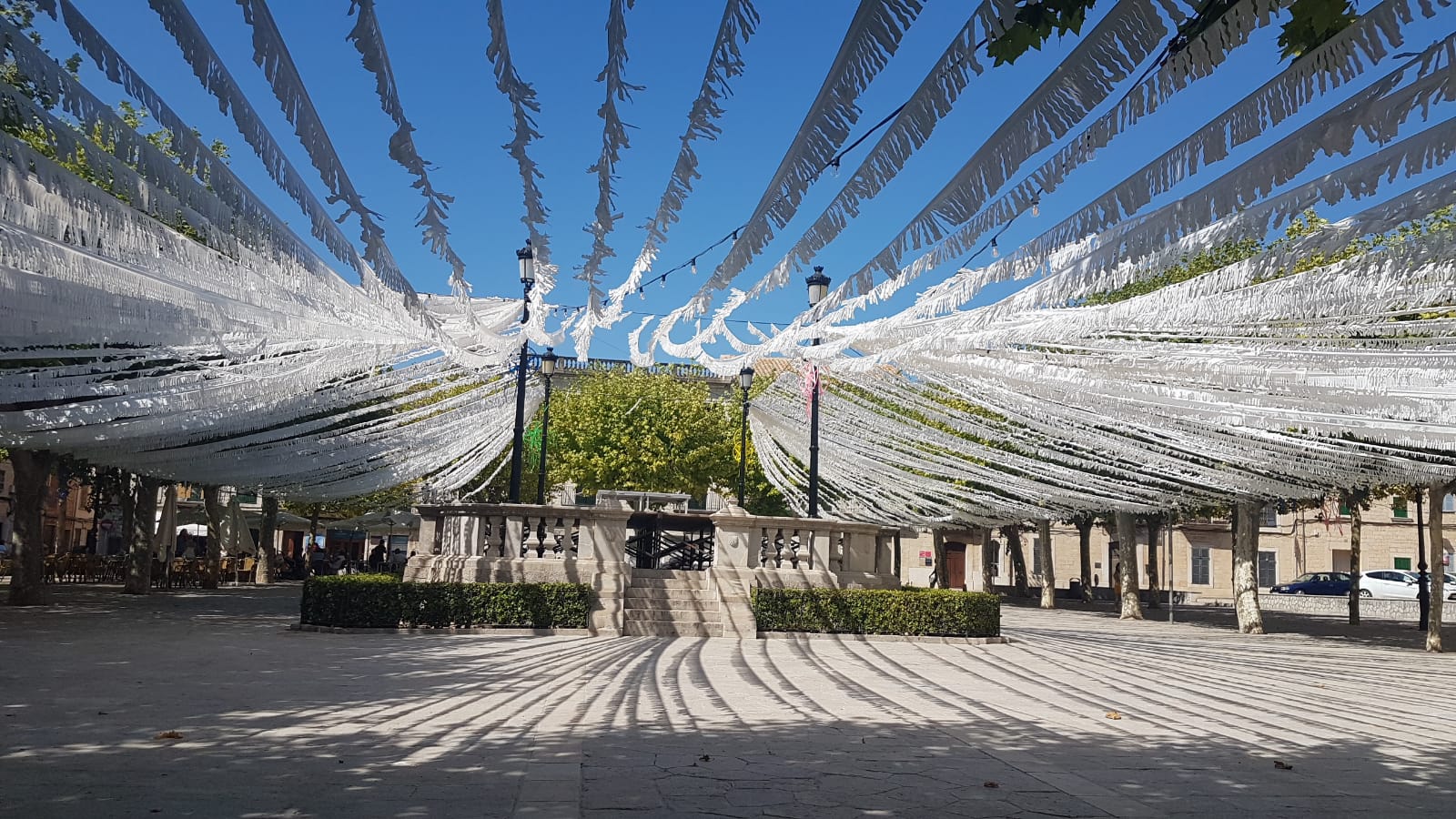 The symbol of the village is the scallop shell of the pilgrim’s route to the Santiago and Saint James or Sant Jaume is the village saint. It was part of the complex routes across the whole of the Mediterranean leading to the shrine of the saint in Santiago.

Binissalem, translates as the Children or Sons of Peace from Arabic and would have original been the central hub of a collection of Moorish estates in the surrounding area focused on the springs of fresh water which come to the surface in the surrounding countryside, the remnants of which can be seen in the names of the smaller hamlets surrounding the village, Biniamar, Binibona , Biniali. Biniagaul.

Wide selection of restaurants, and bars. Many of which are listed on Tripadvisor, and vary from fine dining to local fair.

Visiting from May to August, there is music and dancing on the main plaza each Friday evening oversubscribed and fully booked tables on the plaza and often with up to 3000 people either enjoying people watching or taking part in the dancing, For many visitors this leaves a lastly memory of a whole community out together enjoying themselves most of whom are shocked to realize this is not a special event but a weekly coming together of the community though the summer months. To enjoy the spectacle Restaurant Terra de Vino is highly recommended be sure to book two days before and ask for a table with a view of the plaza.

Ruta de Tapas each Thursday shared between a community of local bars and restaurants with tapas offered at each venue and one of the community of venues hosting music for the evening at the end of that week’s route. Es P’dal is an ideal option on the route great pizzas and music.

For the more relaxed visitor who doesn’t wish to venture to far but would like to experience local culture the village has a constant series of fiestas. All of which are organized by the local town hall and attract both locals and visitors from Palma and tourists.

The traditional Spanish new year’s celebrations in the main plaza, followed by music and a performance by local dance groups or musicians.

Arrival of the kings firstly by train to the local station but from there on horseback with their companion’s parade though the village to the main plaza, were each king distributes gifts to the local children. The town hall organizes the collection of gifts during the week before the 24th so parents can drop off a gift and select a King.

Bonfires throughout the village streets and celebrations of the saint’s day and jumping the fires. And the blessing of the animals on the closest Sunday morning to the 17th.

All of the traditional features of Spanish Easter week parades on a smaller and more rustic scale than the parades in central Palma.

A week of exhibitions of the work of the local stonemasons centred on the main plaza which includes the construction by their guild of a full sized piece of stone work, in previous years the centre point has been a full sized traditional wind mill, and olive press. Thought-out which local food wines are offered for tasting.

The local saint’s days running over two weeks of the month with music, art exhibitions, and evenings in the main Plaza which concerts by local groups from the music school, and local bands.

The final Saturday is normally a full big band playing dance standards followed by fireworks and a night of the dimonis the traditional Catalan devils. Their performance normally follows a theme, and takes place over an hour centred around the main Plaza.

Two weeks of the wine festival the last two weeks of September, opens with ArtGoleta on the first Friday evening of the festivals the oldest street in the village opens its doors to display the work of local and international artists who are part of the local community.  Residents host an artist in the entrance hall of their home providing tapas and wine to taste.

Each day of the festival offers a different event, some very local such as the Grape Pickers Supper in the main plaza, others like the Battle of the Grapes attracts visitors from across the island and farther afield.

Concluding on the last Friday evening of September with  the now famous Soper Fresca, when the traditional dishes are served and all the village streets from the train station to the main Palma road are close so between, 15,000 and 20,000 people can sit in the streets to dine with family and friends followed by traditional music and fireworks, in the main plaza.

Any cookies that may not be particularly necessary for the website to function and is used specifically to collect user personal data via analytics, ads, other embedded contents are termed as non-necessary cookies. It is mandatory to procure user consent prior to running these cookies on your website.